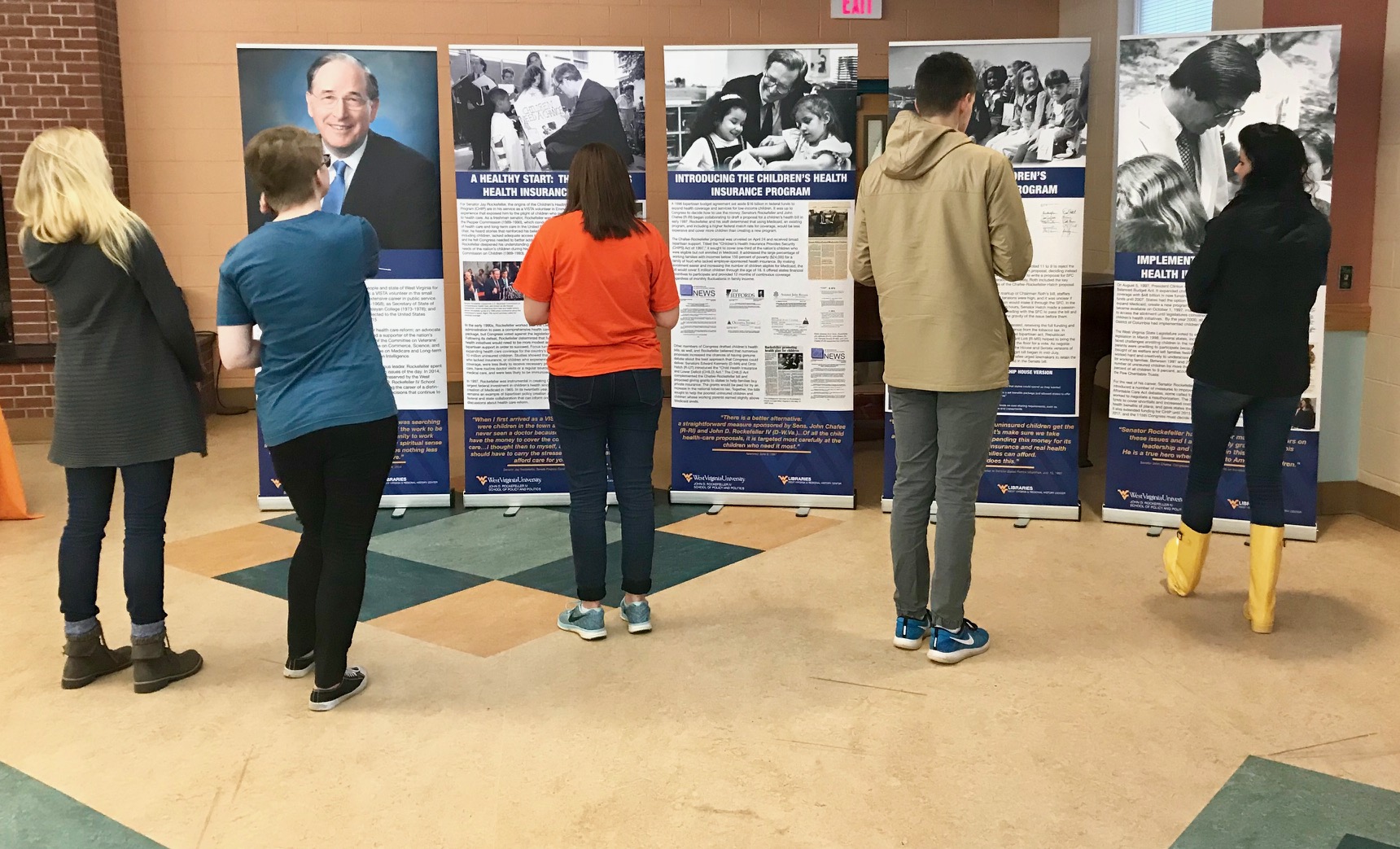 The Modern Congressional and Political Papers Collection typically places one exhibition on view each year in the WVU Downtown Campus Library's John D. Rockefeller IV Gallery. Occasionally exhibits may travel to other locations. Some exhibits are available online through WVU Libraries. The Collection also contributes to collaborative outreach and exhibit projects locally, regionally, and nationally.

The People's Branch: Exploring the U.S. Congress in the Archives 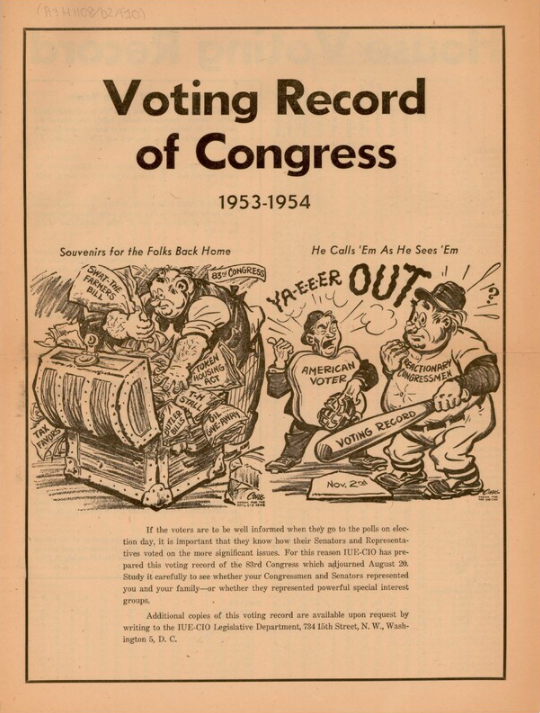 The United States Congress is the branch of the federal government closest to the people, where representatives and their constituents most directly engage over the issues of the day. Yet many Americans view Congress with a mix of frustration, confusion, and disapproval. The People’s Branch: Exploring the U.S. Congress in the Archives seeks to promote a better understanding of Congress. It is a digital version of an exhibit that was on display in the WVU Downtown Campus Library’s Rockefeller Gallery in 2018. The People’s Branch uses archival materials to explore the basic functions of Congress and the importance of the institution in American democracy. It highlights the representative responsibilities of the body and the interactions between politicians and constituents. It encourages visitors to consider how Congress has evolved over time and how it continues to shape politics and public policy.

For the Dignity of Man and the Destiny of Democracy: The Voting Rights Act of 1965 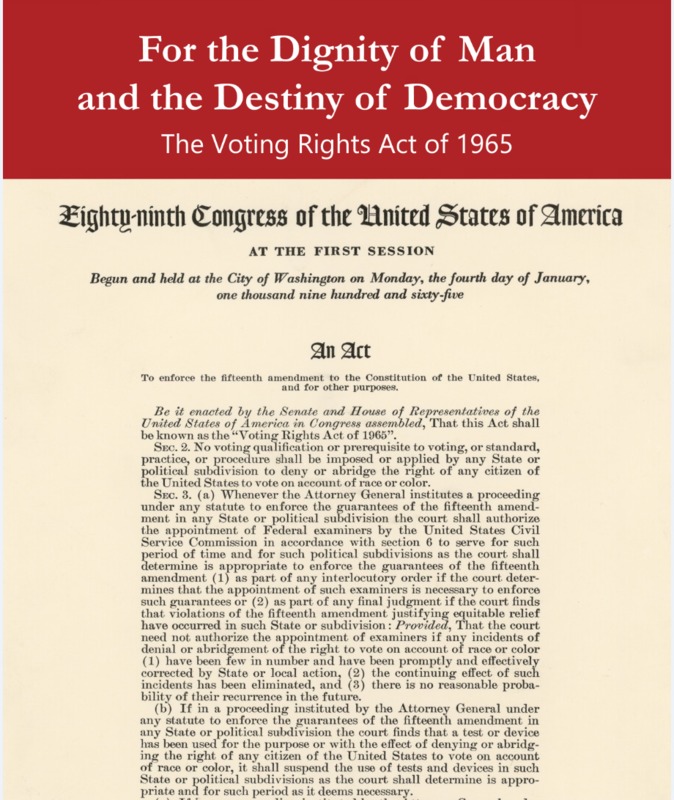 Almost 100 years after the Fifteenth Amendment was ratified, the Federal Government passed a law to enforce its promise that the right to vote could not be denied on the basis of race. The Voting Rights Act had strong bipartisan support, but Congress spent several months debating various aspects of the legislation. President Lyndon Johnson signed it into law on August 6, 1965. The exhibit, For the Dignity of Man and the Destiny of Democracy: The Voting Rights Act of 1965, explores the long history of the Voting Rights Act of 1965, the debates over its passage in Congress, and its legacy. Most of the materials exhibited come from the Arch A. Moore Jr. congressional papers at the West Virginia & Regional History Center. This is the digital version of an exhibit that was originally displayed in the Downtown Campus Library's Rockefeller Gallery, January-March 2020. 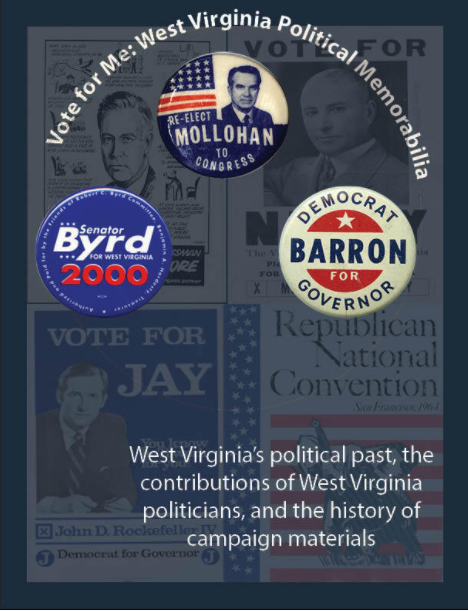 Elections are a foundation of American democracy. The act of campaigning for public office is nearly as old as the Republic itself, but elections and campaigns have changed over the centuries.  The exhibit, Vote for Me: West Virginia Political Memorabilia, seeks to uncover the histories behind the artifacts that became the symbols of the campaigns, the parties, and the people they represented. Curated by graduate assistants in the Modern Congressional and Political Papers Collection at the West Virginia & Regional History Center, the exhibit includes materials from the twentieth and twenty-first centuries. New materials will be added to the exhibit periodically.

Between January 1965 and December 1966, the 89th United States Congress enacted the most extensive legislative program since the New Deal. The Voting Rights Act, Immigration and Nationality Act, Elementary and Secondary Education Act, and Social Security Act each were transformative pieces of legislation and cornerstones of President Lyndon Baines Johnson’s far-reaching Great Society agenda. They are also but a few of the many significant laws passed during the 89th Congress’ two sessions. The Great Society Congress digital exhibit explores the central role that the 89th Congress played in the construction of the Great Society and reveals how some of the most impactful pieces of legislation in American history were debated and shaped. The exhibit is a collaborative project of the Association of Centers for the Study of Congress member institutions, including WVU Libraries.

A Healthy Start: The Children’s Health Insurance Program  is a 2017 exhibit that examined  the history of CHIP on its 20th anniversary (2017). It explored the Senator Jay Rockefeller's work to navigate the conflicts and compromises in Congress that brought it to fruition and the real effects of policy on individuals. Senator Rockefeller was instrumental in creating CHIP and in forming a bipartisan coalition in Congress that backed the expansion of children's health care despite an inimical political climate. On August 5, 1997, President Bill Clinton signed CHIP into law, extending health coverage to millions of uninsured children with the largest federal investment in children health since the creation of Medicaid in 1965.